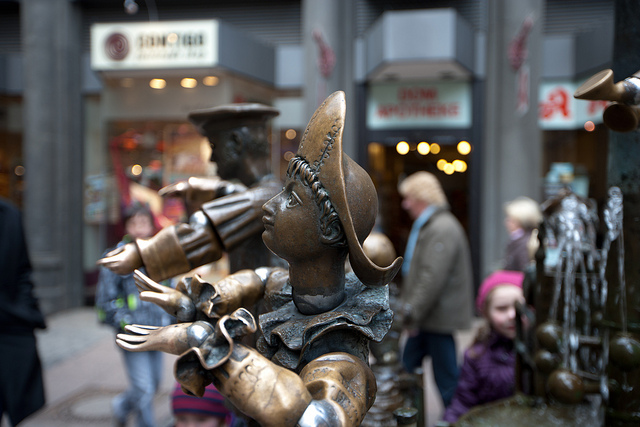 Aachen is one of those small cities in Germany that is easy to overlook (especially if you are on a whirlwind tour or Europe), but this ancient gem is very easy to get to and definitely worth avisit. It is child friendly too. In this article we share with you a few of our favourite things todo in Aachen with children.

The easiest way to get to Aachen is by train and this will be a fun adventure for the children. Think of all the fun “eye spy” games you can play as the scenery passes you by. Aachen is the westernmost city in German – close to the borders of Belgium and the Netherlands. If you are catching the Eurostar from London then it’s just a quick change at Brussels and you will be in Aachen in no time!

One of the most important rulers in the history of Europe was Charlemagne. Becoming King of the Franks in the year 768, Charlemagne’s empire expanded to take in all of western Europe – the first to do so since the collapse of the Roman Empire’s hold on this region nearly 300 years earlier. Charlemagne’s imperial city was Aachen – it is believed that he was born here or nearby, and it is here that his body was laid to rest after his death in the year of 814!
Aachen remained an important imperial city long after the death of Charlemagne, with all the German rulers (30 kings and 12 queens) coronated here through until the 16th century. Aachen was the first city to be captured by Allied forces during the fighting of World War II, and the city suffered extensive damage. As you walk through the streets of Aachen today it does feel very much a modern city (it is known as one of Germany’s tech-hubs), but there are glimpses of its ancient role in the creation of Europe. The massive Aachen Cathedral has survived – construction on this began in the year 796! It is here where Charlemagne’s remains were interred. The city hall dates from around 1330, and there are two of the old city gates still standing, connected to parts of the medieval city walls. Wander the streets and try and comprehend everything that this city has seen across the centuries.

Go to a Soccer game!

Germany are the current World Champions at soccer so why not take in a game at the New Tivoli, Aachen’s modern football stadium.

Visit the Aachener Tierpark, home to over 250 species of animal and with 3 km of pathways for families to explore. The children can get up close and personal with some of the animals in the “children’s zoo” section.

Aachen has many interesting fountains dotted around the city centre. Your children will especially enjoy the Puppenbrunnen, which is an interactive fountain composed of puppet characters. It is in Kramerstrasse, near the cathedral.

If you are visiting Aachen in December then do visit it’s famous Christmas Market in it’s town square. It has a colourful and festive atmosphere and there are many stalls selling Christmas decorations and gifts, as well as delicious traditional German food and beer of course.

One of the interesting features of Aachen is its hot springs. The Elisa Fountain in the city centre bubbles up warm water – a good way to warm your hands on a cold day. Just be prepared for it’s rotten egg smell because the spring water contains sulphur! The hot springs was one of the reasons that the Romans first set up a settlement in the area, and the choice of Aachen as an imperial city was party driven by the German kings using the town as a winter retreat. Aachen is still known as a popular spa town today – head to the Carolus Thermen spa to take the waters, they also cook traditional local biscuits here in ovens that heated from the heat of the saunas. Aachen may not be one of Germany’s best known attractions, but it is a charming city with anincredible wealth of history. Definitely worth investigating.