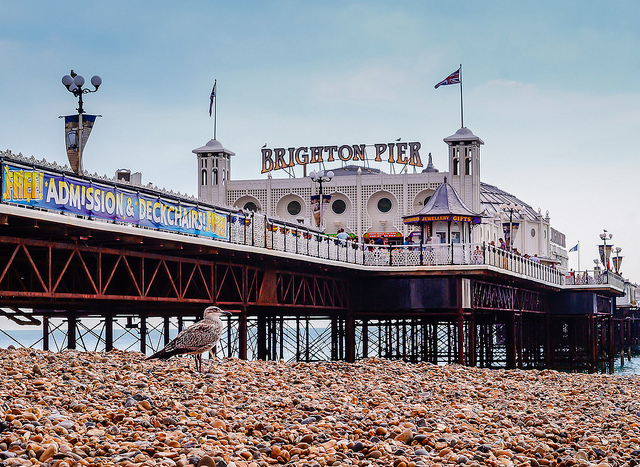 There is something strangely appealing about the British seaside. Pebble beaches, fish and chips, candy rock, and amusement parks. A faded glamour that hints at bygone days before budget flights made the rest of the world so much more accessible for summer holiday breaks. But the joy of the British seaside lives on, and no where is it more vibrant and thriving than the town of Brighton – on the coast directly south from London and easily accessible by a 1 hour direct train journey.

Brighton has a lot more going for it than just its retro charm – in this article we share with you some of our favourite things to do there with the family.

Brighton’s main pebble beach is a surprisingly relaxing and friendly place to spend the day. Set up camp, stock up on ice creams and fish and chips, and practice your pebble throwing if it isn’t warm enough to brave the waves. In summer the beach gets incredibly crowded with the masses of people escaping London’s heat to spend the day trying to cool off on Brighton’s pebbles.

Built in 1899, Brighton’s pier is an old school amusement park – there are arcades, games, cafes,
restaurants, gift shops and a fairground at the far end. If the weather isn’t quite warm enough for sitting on the beach then the fun activities on the pier are a good distraction. Rides cost about 4 pounds each so if you’re spending several hours there it is worth paying the 15 pound fee each for unlimited rides if you’ve got the funds. At the beach end of the pier there is also a large ferris wheel that gives you great views out across the ocean and the surrounding area. The Brighton Sea Life Centre is nearby on Marine Parade and has turtles, piranhas, and sharks to admire. A fascinating and eerie site further down the beach is the ruin of the West Pier which was built in 1866 but destroyed by fire. Just the metal carcass of it remains and it refuses to collapse into the sea.

Brighton is on the edge of the region known as the South Downs. You can drive (or take a bus if
you don’t have a car) to the local lookout known as Devil’s Dyke. From there you get
spectacular views across the Downs. From Devil’s Dyke there are a number of walking trails
that you can embark on, or just hang out for a while flying kites and watching the hang-gliders taking flight.

While much of Brighton has been developed to look like nearly every other town in Britain, there is a pocket of the city that has retained its old-world charm and character. Just a short walk from the station, this neighbourhood is known as Brighton Lanes or simply the Lanes, and is a jumble of narrow alleyways, and twisting old streets that are lined with boutique shops, antique stores, and quirky delights. It is almost like stepping into the magical world of Harry Potter.

Easy to get to and with plenty to explore whatever the weather, Brighton is definitely a destination that
your entire family will enjoy.