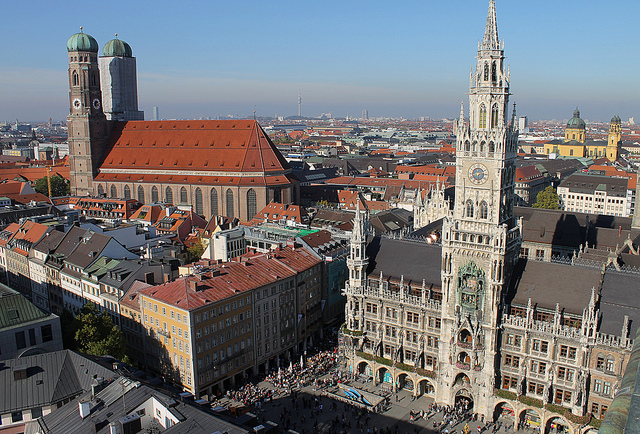 When you imagine old-world Germany, the world of Grimms’ Fairy Tales, chances are you are conjuring up images of men in lederhosen, huge steins of beer, rich comforting food, and a love of music and dancing. Chances are you are conjuring up Bavaria – an ancient medieval kingdom that now forms the state of Bavaria within Germany. Munich is the capital of Bavaria, and traces its history back to the 12th century. It has a long and illustrious history that Bavarians are incredibly proud of and continue to enthusiastically celebrate. Munich is a stunning city, but also surprisingly family friendly. In this article we share some hints and tips to help you plan your family’s fairy tale expedition.

Politics is a subject best avoided on a family holiday, but recent German history has had such a profound impact in shaping the world as we know it today that you are a little obliged to educate your family while you travel through this region. It was in Munich in the early 1920s that German national socialism and the Nazi party first rose to prominence. When the National Socialists took control of Germany in 1933, Munich was a key centre of power. The first concentration camp was established at Dachau – just 10 miles out of the city. Heavily damaged by air raids during World War II, Munich was completely rebuilt after the US took control in 1945. Since then Munich has prospered economically, but a further political twist came in 1972 when members of the Israeli Olympic team were taken hostage and assassinated by Palestinian extremists during the 1972 Summer Olympics held in Munich.

The best way to appreciate Munich is to walk its old streets – despite the bombings and reconstruction of its recent history, the old street layout has been retained and many historic buildings have survived. Start in the central square of Marienplatz in front of the town hall. Old city gates that date back to the medieval fortifications are still standing. There’s also some amazing churches in the city that may not interest the kids too much – but at least try and get them to the Frauenkirche, the city’s cathedral and a stunning building.

One of the best ways to experience a city like Munich is through its food. There are a lot of Bavarian specialities, some of which may not be to the liking of your children, but make sure that you get a good start to your day with a meal of the traditional white sausage, served with sweet mustard and a freshly baked pretzel. The tradition is that these are only eaten before 12:00 noon – this dates back to before refrigeration and ensured the freshness of the sausage. Everyone loves apple strudel and Bavaria is the home of apple strudel – always served with a generous helping of vanilla cream.

While a massive beer festival may not seem particularly child friendly, Oktoberfest is a lot more than just drinking beer – for two weeks in late September Munich comes alive with millions of people, dressed in traditional costumes and enjoying themselves. You might think that people would only wear the traditional lederhosen or dirndl if they were going to a beer hall or a party, but everyone just seems to wear them everywhere at this time – proud of their Bavarian heritage and embracing the spirit of the occasion.

Brush up on your fairy tales and dive into the weird and wonderful world of Munich and the ancient kingdom of Bavaria.