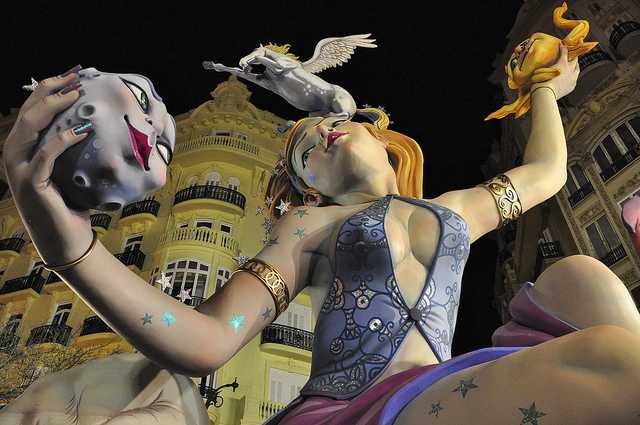 Valencia is one Spain’s most fascinating cities – a history stretching back to the Roman Empire when Roman colonists settled there around the year 100BC. When the Moors from Northern Africa took control of most of the Iberian peninsula (around 700AD), the churches and temples that had been built by the Christian church were converted to mosques and the city remained a centre for Islamic culture until 1238 when the Christian King of Aragon conquered the city, expelled the Muslim population, and converted the mosques back to churches. Fascinating if you are interested in history, and appreciate the mix of architectural styles that can still be found within the old city walls. But is it the ideal location for a family vacation? Absolutely. In this article I’ll give you a few hints and tips on how to make the most of your family’s visit to Valencia.

Festivals
The Spanish love their festivals and throw real energy into their celebrations. The best festival in Valencia is Las Fallas which is held in March each year. This is a festival that originally began as a competition between the city’s carpenters, building effigies of their patron saint that would then be burnt as bonfires. This tradition has grown and evolved and now each neighbourhood in the city builds their own effigy – competing to create the largest and most elaborate construction. The effigies are then burnt in the street on the final night of the festival and everyone goes out and enjoys themselves. Like most festivals in Spain this runs late into the night so you will want to try and ensure that everyone has a siesta so that you can stay up late to enjoy the fun.

Food
Head to Valencia’s central food market (Mercat Central de Valencia) for a fantastic food experience for the family. It has an huge number of stalls offering all sorts of fresh produce, meats, seafood, fruit and vegetables. This is a great spot to grab an easy lunch – jostle your way into a counter seat at one of the cafes and snack on a great variety of tapas-style goodies. Even if your kids are not particularly adventurous eaters, the small plates of tapas food are a great way to get them to try a few of the different things that you will have seen around the market – if they don’t like it you will just have to finish it off yourself! Grab a glass of Fino or Tempranillo too – tapas always tastes better with a small glass of sherry.

Outdoors
Valencia was founded in a strategic position on the banks of the Turia River. In 1957 the river flooded and devastated the city, and killed over 80 people. To avoid any future flooding, the river was diverted, the new course taking the river around the city, leaving the old dry riverbed running through the city. The old riverbed has now been turned into a fantastic park that is always full of locals out enjoying themselves. There are cycle paths, football pitches, climbing walls, and cafes. There’s also a great adventure playground which features a huge model of Gulliver (from Gulliver’s Travels) tied to the ground with ropes (which the kids can climb on).

Ancient and fascinating, but also vibrant and exciting. Your family expedition to Valencia will be an adventure that you will treasure for years to come.