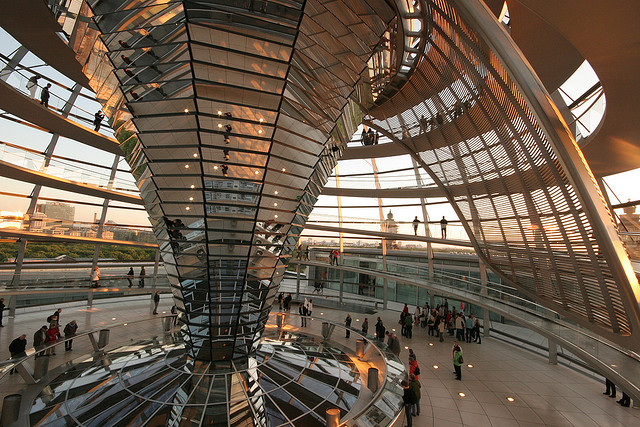 The capital of Germany is a city that is rich with history, tradition, art and culture. Since emerging as the
capital of the Kingdom of Prussia in 1701 the city of Berlin has played a key role in
shaping the world as we know it today.

Berlin is a vibrant and fascinating city – the perfect destination for a family expedition.
Not only will you find plenty of activities and points of interest to
amuse the kids, but you will inevitably soak up the history that is living around you, ensuring that
this is a holiday that will help open your children’s minds as to how the world works.

Cycle the streets
If your kids are up for a bit of cycling, grab some hire bikes – there is a great network of cycle paths
throughout the city and you’ll be able to cover a lot more ground as well as getting some exercise.
There are cycle tours of the city and the cost of the one I took was by suggested donation.
Fuel up on pretzels or curry wursts if you get tired.

Walk the wall
While East is now connected to West, it is still important to understand how the Berlin wall divided
this city in every way. Only a mile or so of the wall remains and it is now a powerful memorial that
runs along the Spree River. It is painted vividly and it is fascinating to wander along and experience it
first hand. Also visit Checkpoint Charlie – the most famous border crossing during the cold war and
often a key setting for spy thrillers.

Ride the trains
Berlin’s public transport system is one of the best in Europe – clean, efficient, and easy to use. The
ticketing system is fairly easy to follow, but there are also multi-day tourist tickets available which
can make things a bit simpler if you know that you’re going to be moving around a lot. They don’t
have ticket barriers but they do have a lot of plain clothes ticket inspectors riding the trains who will
dish out fines with ruthless efficiency if you try to ride the trains without buying a ticket.

Learn the history
Germany’s role in World War II is still very much recent history and you can feel that wherever you
are. Berlin was the target of 363 air raids during the war – the devastation was extreme and much
of the city had to be totally rebuilt. If you only do one educational or historical thing while you
are in Berlin, make sure you take your family to the Memorial to the Murdered Jews of Europe.
Simple but incredibly clever in its design, the memorial is 2,711 concrete slabs arranged in a grid
pattern on a sloping field – representing an ordered system that has lost touch with human reason.
It is emotionally overwhelming. The Reichstag Building which became home to the German parliament
after reunification is also an excellent place to visit. A mixture of old and new architecture it
is topped by a spectacular glass dome and from the rooftop you have 360 degree views of the city
including the Bradenburg Gate.

Live the lifestyle
One of the most enjoyable things about Berlin is just hanging out in the eclectic and cool
neighbourhoods such as Mitte or Shoneberg, exploring the local shops and soaking in the local
atmosphere. It is a surprisingly liveable, friendly, and welcoming city.

Berlin is truly one of the world’s great cities in every sense of the word.